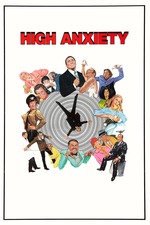 "But Professor, is it really nece...“ (Dr. Richard Thorndyke)

„It IS nece. I know what is nece. Don't tell ME what´s nece. I tell YOU what´s nece." (Professor Kleinaltmann)

Mel Brooks' sixth work is also his last good and overall successful one on the director's chair, even if there are already signs of sheer, situational teasing, of episodic jokes, away from a homogeneous and intriguing story that is comedic and filled with a sense of juicy humour, but would also work without any rough jokes.
An introducing panel makes it clear that this is done with respect, because the film is dedicated to the “master of suspense”, Alfred Hitchcock.

Mainly his "Vertigo" is at the center of interest and attacks, especially in the finale on a tower, but there are also clear references to "Psycho" with an own, really well-made and charming shower scene, which apes characteristic camera shots and editing rhythm and also "The Birds" get what is coming to them.
Several establishing shots would not be noticed in a Hitchcock movie as well, the music by John Morris mostly leans clearly on various themes by Bernhard Hermann, technically there are a few nice transition shots to appreciate, giving the deeds a certain flow, holding the structure together. Some other manners from various thrillers show that Brooks aimed for a movie that works properly.

In addition to directing, Brooks also played the lead, wrote the script, produced it, composed and texted and sang the theme song. His performance is good, topped by Madeline Kahn, who was clearly modeled on a character from the Hitchcock-oeuvre.
She played for Brooks the second and penultimate time here. Her performance is wonderfully exaggerated, but without hysteria, not too detached and just great. I had to laugh a lot when she, at the end, misinterpreted the phone call, pretending a couple of seconds later that she has seen through the situation all the time anyway.

Besides Professor Kleinaltmann, who is of course one of those quirky teutonic characters penned by the director, Cloris Leachman delivers the real show here, also for the second and penultimate time in a Brooks film. Her Charlotte "nurse" Diesel carries almost fifty percent of the films substance, her facial expressions and gestures are always exaggerated, but gorgeous on point and she even sports a very fine beard that looks like the peachfuzz-version of a Clark Gable´s.
And to bring that together nicely, you get to see a telling Nazi fetish routine here.

Other highlights include patients who dream of werewolves or who are convinced that they are a cocker spaniel, a bleeding ear due to wrong music from the car radio, the mask trick with the associated murder, which has a quite amazing character for such a production and there is a cocky smuggling operation at the airport of San Francisco.

Incidentally, Alfred Hitchcock himself liked the film and praised Brooks, sending him some fine wine bottles. He himself had ended his career a year earlier with his last work for cinema.

Total: Not every joke here is a bullseye, but you can have fun with most of them and the storytelling. The more you know the genre and the better the cited role models, of course, the better. But Brooks played it safe.

History of the World: Part I