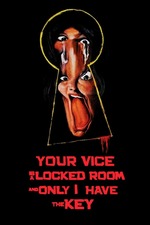 Your Vice Is a Locked Room and Only…

„You can´t even imagine what goes on in Villa Rouvigny.“ (milkman)

What do you do when you just can't think of a melodious title for your new movie? Exactly, the first thing to do is you look around in your related predecessor films to see if you can find some nifty term.
This is what probably happened here with Sergio Martino´s quasi-giallo-jam, which is part of his early 70s yellow phase and owes its chic title to a letter from his own predecessor "The Vice Of Mrs. Ward".
And since "vice" is nice but not enough for an entire feature, Edgar Allen Poe´s written legacy was also engaged, whose short story "The Black Cat" can be recognized here in its main features, especially in its subliminal reincarnation theme and in terms of its ending.

Nevertheless this is quite a stew, which doesn´t even set its Giallo-plot at the center of interest, but unexpectedly dissolves and ends it in the first half, which then leads to rather sleazy bantering and even leads to some legacy-hunting. This results in a rather strange thicket, the often questionable psychology of which, at least to me, remained closed. I probably just didn't have the key.

The motivated Anita Strindberg comes away best, whereby they quite overdid her make-up and gave her some chiseled facial features, which in combination with the voluminous hairstyle results in an almost sophisticated appearance from the greek tragedy, that somehow looks inappropriate, since she´s drawn as mentally weak. But maybe that's just the attraction that passed me by.
The almost constantly sweaty and slightly oily Luigi Pistilli is a full-fledged sleazebag from the start. But he´s loyal to himself and it´s still understandable why the dark-skinned housemaid can not only be verbally humiliated but also sexually exploited by him.
But when Edwige Fenech (here with a bob haircut ... wig?) drops in, the scene as a pretty to look at but rather hatable niece, letting him into her pants after initially taking sides for Irina, that's actually completely dopey. At that time she already has been laid by the hormone-driven and motorcross-driving milkman, because she´s a promiscuous, bisexual thing whose catalytic, sexual component is very obvious.

All of this is neither reflected nor refracted, but simply asserted straight faced and chucked into the room. Just like the expressly daring wig by Ivan Rassimov (the author of the letter mentioned at the beginning), who has only some three to four minutes of screentime and also ends up as fertilizer, when the rather flimsy twists pile up at the end. But that seems pretty imposed.

What absolutely pleases is the music by Morricone-companion Bruno Nicolai, which is used well, prominent but not overutilizized, both the soft theme as his energetic compositions.
Technically, everything is very nicely designed, starting with the initial celebration, which jazzes up into a statement against Oliviero's racism attitude and his colonialism-rubbish talk, underscoring the diegetic tunes with some conclusive nudity. A weird and audiovisually unusual scene.

The murder scenes are pretty rough, but overall the level of violence and blood isn´t overstimulated. The editing and score are on point here, short, crisp and made with handheld camera. They´re in contrast with the otherwise rather quiet staging, which has been lit tastefully, whereby the mood is mostly depressed and gloomy. This is also due to classic gothic and horror mannerisms, which are often used here, not only when thunderstorms are the order of the night.

I always waited a little for someone to air his/her wig with a fanfare, but the film remains straightforward and carries out its program seriously.
What´s also nice to look at is the tastefully implemented and purely female love scene, which unfortunately ends somewhat abruptly and inelegantly. And it´s also somewhat inelegant if Irina in the basement providing a happy summary of th events you just saw, beautifully into the lens. A slighltly questionable service ...
And the advertising poster "Bra Of The Heart", which should possibly be an ironic refraction, would actually have given a great title for Martino's next film. That´s too bad that didn´t happen.