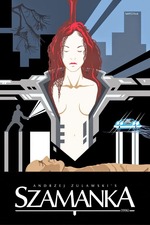 "Every God is a God of death."

My third Andrzej "Unresolved Issues with Women" Zulawski film is also the first one I've outright enjoyed - though whether that's because I actually dig this or have just become numbed to Zulawski's abrasive style is up for debate.

Anyway, Szamanka is the story of an anthropologist who simultaneously becomes obsessed with a polish student known only as 'The Italian' and the centuries-old body of a Shaman. As these obsessions dovetail, the anthropologist's life - hell, everyone's lives - falls apart.

The Italian and the anthropologist's relationship is based in BDSM, though neither accept the place of the sub, instead spending the entire film trying to dominate the other. As their relationship intensifies, the world itself seems to tear apart, and Zulawski starts abandoning traditional logic in his storytelling. He begins likening their sexual exploits to a spiritual experience, and religion in general as a channel through which sexual desire is twisted. As a crying The Italian drips the anthropologist's semen onto his arm in the shadow of a makeshift crucifix, I found myself numb to the crazy imagery, but also entranced. Maybe it's because the hysteria never lets up, but I finally found myself lost in a Zulawski film. Maybe that's the point of all of his works. When hysteria becomes normalised, the only way to feel something is to become more hysterical.

All of this violent outdoing of itself eventually culminates in a scene reminiscent of Possession, except this one actually made me recoil in horror - you'll know the moment when you see it. Zulawski returns to the same themes again and again, and I don't know if I feel comfortable with how much he feints towards outright misogyny, but he's never less than absolutely fascinating.

P.S. There is a scene in this film in which a guy smokes three cigarettes at once from his fist. I found this intriguing.