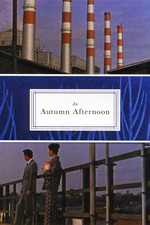 I’m fascinated by how frequently Ozu shows a vacant room – even if just for a second – and feel it adds space and interest to the rhythms of his storytelling. I find myself obsessing over the compositions of these shots; not that they’re “complete” without the presence of his actors, but I do see something really beautiful there.
- Jeff Meyer

How does he do it? How does he make every single shot beautiful? I never thought I would see an image of smoke blowing silently through a window, and just be absolutely blown away by its beauty. I know I've come to expect shots of signs (both lit up and not), but I'm still not fully accustomed to them. I still think they're the most beautiful thing in the world. Just seeing those Japanese characters lit up in these vibrant colors odes something to me. Not to mention, almost every shot of them includes 4-5 of them.

Ugh. The color in this film just jumps off the screen at you. I don't think I've ever seen colors this vivid. The beer they drink is so golden, the lights give off this bright florescent aqua glow, the cups and plates are like a splash of color, the lit signs are so brightly colored... Talking about Ozu's signature hallways... These hallways and rooms he shoots have this effect, where you see shadows on the wall, parts of the wall in pitch black, and other parts in this vivid color. It's amazing.

How does he build a script and make such simple quotes and dialogue so profound and meaningful? I'm just sitting there listening to characters talk about baseball, and I'm just loving every minute of it. One of the characters is discussing golf clubs with his wife and testing them out, etc and you're in love with it. You're just watching the daily lives and discussion of people, but you find yourself captivated by every scene.

Ozu also couldn't have chosen a better cast for his final film. Chishu Ryu is always great, but he's excellent in the starring role. Also, the actor who plays his son Koichi is just amazing as well.

Ozu is the greatest director ever. Period.