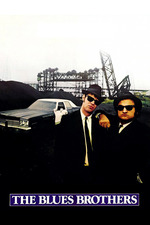 Wow! This is the first time I’ve finished this movie in decades!!

In the years I’ve been on LB I’ve put this film several times but never logged it. I’ve put it on countless times before that and never finished it either. It happens when I’m drunk and texting with my bestie in Chicago, Deric, when he’s drinking too, and we get all excited to watch it together, but it’s two and a half hours long and we’ve never made it through, but that’s our tradition.

See it all started in 2008, when we found each other in kind of the craziest way possible that I’ve written about in my book and can’t really go into here, but the crux of things was we stumbled into one another literally the same weekend our lives imploded when we found out our spouses were cheating on us, and leaving us. We were both in the lowest emotional point of our lives, and we met and literally saved each other’s lives, primarily through laughter.
While I had to give a shout to Adam in my last review because he’s my Belushi-ist friend, no one makes me laugh like Deric.

My bond with Deric is on a level that I just don’t even have words for, he means the fucking world to me.
We were both like that VU song, I’m Set Free when we met up. I’ve seen my head laughing/rollin on the ground/and now/I’m set free to find a new illusion
I mean he was grinding his teeth to bits and gulping painkillers and I was shaking like a leaf full of pain when I was supposed to be sleeping, but it was all so surreal and absurd we just kept clinking beers and jumping up and down on my bed to Fugazi and leaping into pits and stumbling for hours through the wild Chicago streets at night, bar hopping nonstopping. We were at war for our souls, and we were battling it out together.

We’d met in late January, and in July once we were thick as thieves, he thought he was in love with me but I was still despondent to love and would Cher at him, Snap out of it! and one night in July we went downtown to Grant Park.
For anyone who’s not familiar with Chicago, Grant Park is the big giant park along the lake, you know the fountain in Married with Children? Right so that fountain, the Shedd Aquarium, the Alder Planetarium, the Field Museum, all right there. Also right next to Columbia College Chicago campus headquarters where I got my bachelors. Between Lake Shore Drive (LSD) and Michigan Ave.
My point is, there is no better view of the Chicago skyline than that big field where they were showing The Blues Brothers on the biggest outdoor screen in the city. Just magnificent. Like every shot you see of the whole Chicago skyline in movies is usually filmed from that vantage point. The Sears Tower, the Hancock, the Vagina Building…
There has got to be no better place on Earth to see The Blues Brothers.
We brought a huge bottle of sake and a massive pile of sushi and we laughed harder than I think I ever have. The entire crowd was cheering and singing along and dancing like it was a party the likes of which Cinespia’s never seen.
Trouble was, the clouds were grouping together out of nowhere, coming from the city side, not the lake, looming over that Chicago skyline and closing in. We didn’t care, fuck it we gobbled up our sushi and decided if it rained we were staying! It wasn’t cold, it was July, the people who were packing up and leaving were pussies! It’s just sprinkling a little it’s fine! The Blues Brothers were finally about to make it on stage after Cab Calloway got the crowd cookin, but Elwood and Jake were greasing up the brakes and that sky kept closing in. It started raining, harder and harder, but we just laughed and chugged our sake straight from the bottle and held up the plastic bag the sushi was in over our heads where we were cuddling under it, giggling like kids, and then right when Jake started singing how Everybody Needs Love the picture cut out and the announcement said they had to call it, and we were the only ones left in the whole field, everyone else had ran away, but we just kept singing in the rain. We gave up trying to stay dry and like we were in our own damn movie we screamed and sang and ran around in the rain under that beautiful Chicago Skyline like the crazy blues-loving drunks we were.
Wet like dogs, we finally ran to the train and stumbled into Rodan so soaked we figured they’d kick us out, but we made it to our favorite jazz night and had a long fun night after that that I’ll spare you…
But the joy we felt out there, Deric will always be my Blues Brother for life. Since I’ve known him I’ve watched him lose both of his actual brothers, one to AIDS and one to cancer, and I’m so glad he snapped out of it and we both hung in there, and he found his girl, because now I can be his sister forever.
May we watch this movie for decades to come.
And may we never finish it.