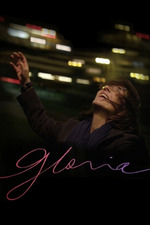 Gloria was winner of the Silver Bear for best actress at this years Berlin Film Festival and nominated as Chile's entry into 86th Oscars in 2014. Director Sebastián Lelio studies a middle aged woman standing at the top of the hill before she tumbles over it, looking back on where life has led her and the ever decreasing opportunities left open.

Paulina García collected that award for her convincing portrayal of Gloria. We meet her in a local haunt, a nightly club where similar middle aged single, divorced or married couples come to have a drink and throwback to 70's disco. Gloria isn't really there looking for anything in particular, more as something to do, to pass the time before heading home tipsy and back to work the following morning. With the kids all grown up - her daughter is moving to Sweden to settle down - life as a single woman in her late fifties leaves a fair amount of time to kill outside of work.

Shortly after meets a similar divorcee, a man who she has an instant attraction to and the couple are soon spending more time together. Rodolfo is slightly older and the more introverted of the two, claiming to be seeking a second chance later on in life following his divorce. His two daughters and ex-wife still play a large part in his life as he supports them financially, almost at their beck and call.

Lelio gives Gloria the face of the every woman, experienced enough in life to know what she wants without the need to shout it out loud. Neither is she afraid to express her sexual drive, often in control of her time with Rodolfo in the bedroom. We see their intimacy in a number of instances all of which are displayed without much fuss. She wants to enjoy her time in the company of a man who wants to experience singledom with her which leads to some good and some bad choices, all of which feel tangibly real.

García is wholly convincing as the slightly depressed yet hopeful divorcee and manages to make the world she inhabits as believable. Yet her story never really flies off the page and there is an air of apathy that surrounds the time you spend in Gloria's company. A less heavy handed final act may have gone a long way to avert the clichéd turnaround. And as beautiful as a white peacock may look and Laura Branigan's 80's song finally get its queue, the metaphor grabs you rather unsubtly round the throat.

There may be a certain set of people who find this more enjoyable or connect with her journey more than I did - although I had no issue aligning with the recent Le Week-end. Gloria boasts a fine enough performance from its protagonist but lacks a strong enough script to truly light up her story.