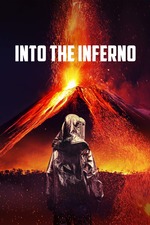 Our relationship with volcanoes and the unspoken, mystical power they hold over mankind is explored by Herzog, peering into the raging red eye of our planet. His intention is that those living underneath the shadow of these rocky monoliths are his main concern, unearthing the fear, respect and spirituality derived from an existence so perilously close to the source of such simmering, indiscriminate rage. Much like his recent Lo and Behind film, the focus isn't as sharp as it could be, taking onboard too many distractions that catch his eye along the way.

That said, when you are present to capture only the third ever discovery of ancient human skeletal remains on the plains of Ethiopia, it's a hard ask to edit that out. Likewise the opportunity to film in North Korea, no matter how restricted or propaganda filled it may be. These parts alone are fascinating but it feels like we are wondering away from the main topic. They do provide a context to the wider subject but the Africa visit in particular seems to ignore the reason for Herzog being there in the first place. Learning about the odd religion of John Frum in Vanuatu or the annual gifts offered up to volcanic Gods in Thailand is where the real interest lies. The photography is stunning at times and along with Herzog's hypnotic musings, there is much to mull over.