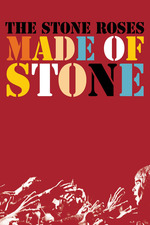 The Stone Roses: Made of Stone

There is a moment roughly 25 minutes into Shane Meadows fan obsessed documentary about The Stone Roses that perfectly encapsulates not only the band in question, but musical groups in general. Lead singer Ian Brown and guitarist John Squire are being interviewed one week before the release of their seminal self titled debut album, neither of them particularly verbose with their responses to the questions. The camera cuts to Squire searching for a response and you see Ian's hand reach across and pluck an invisible hair or tick from the face of his friend, in a particularly subtle, tender moment.

You often hear of bands that describe their time together as a marriage. It starts with the lust of enjoying the same musical influences and shared passions spilling out through their chosen instrument. Love blossoms as they find a synergy that creates something unique and special, perhaps inspiring those who see or hear their music. Then the irritations start to rise that used to be ignored, becoming magnified the longer they spend together and prove to be the make or break point in their relationship. Get past that and longevity awaits, if not, then they have to hope that what they created together leaves behind a legacy.

Even when you split from a true love, that bond never truly breaks, always sitting silently in the background nestled into the corners of the mind. When the chance to reunite arises, it is hard to ignore those echoes of desire that brought you together in the first place.

Shane Meadows is a fan of The Stone Roses, unashamedly placing that passion at the heart of a documentary focusing on their recent reunion. The director of This Is England and Dead Man's Shoes holds the perfect credentials to shoot a documentary about a group who represented the everyday man in the street, particularly from Manchester and the cities in the Northwest of England.

Long before the Gallagher's somehow blustered their way to stardom with Oasis, The Stone Roses embodied a movement in the UK music scene that influenced a generation of guitar based bands still forming new music today. For one album they held the mid-teen to early twenties market captive with their blend of old and new influences scorched into a self belief bordering on cocky arrogance.

The group inspired a young nation attempting to find their feet in the dying throes of a Thatcher government who had thrown them onto the scrap heap. They were from the same place as their fans which enabled their followers to believe in a life outside of their mundane nine-to-five existence.

Meadows is given access to their practice sessions before they head off into Europe before returning to a Manchester homecoming. Shot in black and white, these moments encapsulate the intimacy of four old friends reliving their youth, effortlessly playing back their classics with knowing nods and smiles as the notes slide through the air. Even if you are not aware of the group or a fan of their music, it would be hard not to be swept along in these scenes.

The basis of the film culminates with their performance in front of 75,000 eager fans in Manchester, flicking between old and new footage. It details their formation through to the legal wrangles with Silvertone records that ultimately killed their momentum after the debut album. Fans will find it hard not be dragged back to their youthful optimism through songs that recall a turning point in the musical landscape of the UK.

Apart from a awkwardly extended live version of 'Fools Gold' in the final concert, Shane Meadows presents a fitting documentary for a band who were always very much at one with their fans. The personal problems that caused a rift for almost two decades are skimmed over but they have been well documented elsewhere. The purpose of Made Of Stone was to celebrate a reunion with friends and a group that always felt like extended members of the family. It almost feels as if they never left at all.