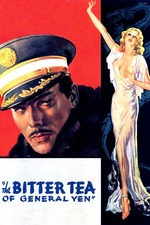 There simply were not any other films like “The Bitter Tea of General Yen” made in the 1930's. Of course, I haven’t seen ever film made in the decade; yet I’m absolutely sure of this assertion. In a movie highly atypical of him, director Frank Capra has one strangely dark scene follow another, romanticizes an interracial relationship, scratches the surface of Buddhist philosophy, and portrays American Christians as ignorant and naïve. No wonder it didn’t sell well to a Depression-era American audience. Still, it shows great bravery on the part of all involved to participate in a film with so many taboo themes. Sure, a cynic could suppose that Capra and crew were hoping that shock value would sell their film. If they did, they were wrong. What they ended up with was a very strange piece of work entirely unique from anything else of that medium, in that time and place.

Even with how boundary-pushing this movie was, it is still not surprising that a white man was cast to play the Chinese General Yen. Today that decision might seem politically incorrect in the extreme; however one honestly can’t blame Capra and the others in this case. To have Barbara Stanwyck actually romantically kiss a real “Chinaman” on the big screen in the 1930's probably would have doomed the careers of all involved in the picture. They do deserve credit for at first playing off of the stereotypical Chinese villain common in films of the time and then twisting that character into a sympathetic, truly complex character by the conclusion.

I spent much of the movie simply wondering where the filmmakers were going with this picture; but not in a bad way. It’s just that the film defies so many early film conventions, even when it comes to plot structure, that figuring out exactly when or how the conflict would end proved mystifying. Indeed, seeing the strange plot – and the surprisingly complex themes underneath it – unfold is what kept me watching without a moment of boredom.