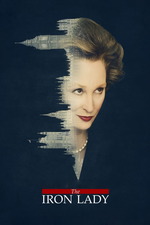 I judged The Iron Lady, as much as I was able, on its own merits rather than my personal political views. Wherever you stand on the political spectrum, it's hard to deny that Margaret Thatcher's world was anything less than interesting. For Phyllida Lloyd to have made a dull film about a towering figure of 20th century politics, both in Britain and internationally, is a big achievement. The tragic thing is that the film sets out to be so sincere: Streep's performance is fine, as practically every other review has stated in the now-six-years since its release, and it's nothing if not earnest (too earnest), yet it falls completely flat.

A overly-significant chunk of its 104 minutes is taken up by Thatcher's hallucinations and imaginary conversations with her dead husband, interspersed with random and hurried snapshots of the important events of her premiership. It's repetitive, frankly, not to mention inaccurate; witness the usage of footage from the 1984 Miners' Strike as suggestive of her difficult first term in office, for example, or the presentation of her as the only woman not only in her party, but seemingly the whole of parliament (Barbara Castle, eat your heart out). Note, also, how a whole eight years of her term in office (between roughly the Falklands War and Poll Tax debacle) is condensed into a two-minute blur of archive footage and little else.

In an attempt to present Thatcher as an inspirational figure at a time when parliament was, yes, overwhelmingly dominated by men, Lloyd relies on unsubtle and clichéd mini-speeches, most based on the theme of being supposedly able to achieve anything that one puts one's mind to. The same goes for the film's displays of British Exceptionalism, usually involving variations on the theme of putting the ""Great" back into "Great Britain"".

The Iron Lady offers far too much insight into the life of Margaret Thatcher and not nearly enough into the times. Perhaps if it had, it could have rescued itself from the cloying mushiness and crap pacing. Then again, was anybody really expecting a masterpiece of political cinema from the director of Mamma Mia? I suppose not.