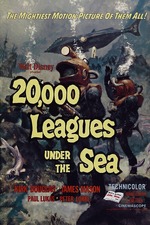 Not rating because my attention wasn’t held this time. ‘20,000 Leagues Under the Sea’ was one of the first movies I saw as a young child and one of the first where I understood that an actor, James Mason, was in two adaptations of works by the same author, Jules Vern, playing different parts. I don’t think I knew that ‘Journey to the Center of the Earth’ wasn’t Disney, but I understood ‘20,000 Leagues’ was. It’s an interesting movie for a young kid, Peter Lorre sounds and looks so odd, particularly in color. Kirk Douglas is also one of the most distinct looking people ever to have lived. I believed completely in the submarine, I don’t remember the name ‘Nautilus‘, from my childhood, but the design is unforgivable. The flight from the Cannibals was very scary for me, though it feels tropey now. Hopefully I can rewatch this on the big screen or with a group someday soon. The movie is on Disney+, but, I’m holdIng on to my DVD.