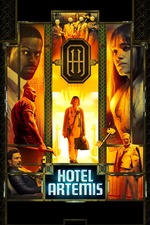 What the hell was this movie even about?! I just wasted 90 minutes of my life and had no idea what the plot was. I don’t think the film even had a plot. A film with such a cool premise shouldn’t be this disappointing and underwhelming. It has maybe 10 minutes of action maximum because it’s actually a well-below average character study hidden behind an action-packed trailer.

I felt like I was watching a cheap ripoff of Suicide Squad set in a John Wick-wannabe universe. It’s just criminals vs criminals surrounded by a bunch of unnecessary and nonsensical plot lines. This was clearly a paycheck film as none of the actors seemed to give a crap about their role, the dialogue sucked, the cinematography and editing were nauseating, and the action, though it was good, was extremely minimal. Vast majority of the characters were unnecessary, especially Charlie Day’s annoyingly unfunny comedic relief character, but “hey we have neon colors and blood, so we made a good movie right?”....NO YOU DID NOT.