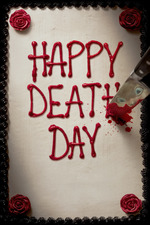 Groundhog day meets Edge of tomorrow meets mean girls. The premise might not be fresh but the execution is delightful. To me, this isn't a horror film it's more of a slasher comedy.
A young college girl wakes up, and keeps reliving the same day over and over again. The day ends with her getting murdered by a masked man. If she solves the mystery of who keeps murdering her, she might be able to put an end to the vicious cycle.
It was a savvy decision by, director Christopher Landon, to have a few twists. It kept the interest alive and the story compelling. He does fail in creating potent jump scares though. The reveal of the murderer was also a hard pill to swallow.
Jessica Rothe does succeed in creating this, at first resentful, but later sympathetic character. She was one of the best things about the film. But the writing of the character falls short of being indigenous. By the end it becomes extremely commercial.
I also think, an R rating would have benefited it. There was little to no gore in it.
Having said all that, I was entertained. It's a slasher comedy with a little heart. There is a lot to like for people who are a fan of the genre. Enjoy!