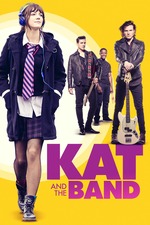 Kat and the Band

A teenager style of film where the main character lies to get into a nightclub by pretending to be a music band manager. And when she bumps into a band she likes so pushed herself onto them so she can manage them. As it turns out, she still a highschool girl pretending and when the band accepts she tries to pull it off hopefully without her secret but realizes what we know from the beginning she's in way over her head. But in good movie fashion, it all works out in the end a very average film sorry if I have ruined it for you.

The Book of Sun