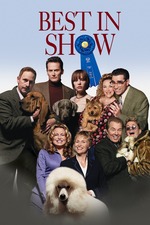 I must admit to being at least somewhat torn in regard to Christopher Guest's improvisational mockumentaries. I do find them to be very funny, and I love the casts he assembles for this movie, not to mention Waiting for Guffman and A Mighty Wind. My apprehension is because the sorts of documentaries he's making fun of are those lovely human interest stories that find some niche pocket of this crazy world and introduce me to people who care very passionately about something that I hadn't given two thoughts to. These documentaries offer a very empathetic experience, so there's something a bit meanspirited in mocking them.

Mocking the people whose lives revolve around dog shows, or local theater, or folk singing, kinda feels like punching down. And yet, the mean-spiritedness of the concept doesn't really come through in the execution. Guest finds a way to make these characters objects of humor, while still caring about them and their happiness, and I think that's key for how these films work.

Take for instance the highly-strung couple in this film played by Parker Posey and Michael Hitchcock. Their hook is that they are constantly fighting about how each other's anxiety is causing their Weimaraner to become anxious. The dog is perfectly placid the entire time all the while the couple keeps freaking out; until the big show when the Weimaraner assaults the judge. In the coda, the couple is blissfully happy, having determined that the dog was the problem the whole time. They chucked her and now train a pug. These people are ridiculous, but looking simply at the broad strokes, they get a happy ending: they started out in an antagonistic marriage and ended in a happy marriage. The film finds away to do this without trying to "fix" their comic flaw. In fact, pretty much everyone ends the film happier than they started it.

I think this is why the concept works (mostly). It's ok to laugh at these people as long as we're also on some level rooting for them, and taking delight in their happiness.