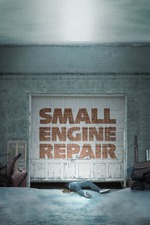 This low key independent buddy movie spends most of its runtime as a leisurely paced, virtually plotless hang out movie until it takes an abrupt turn in its second half to become a topical crime thriller. I won't say much about the twist here, because it's one of those movies that if you like the twist, you'll probably really like the movie. I don't want to spoil it for those who may get more out of it that I did. I will say that the twist doesn't work for me at all. The surprise element is manipulative and the execution of its themes is banal. It involves some culturally relevant topics, stakes out the right position, but treats them with such broad, surface-level messaging, that it's ultimately about as insightful as a Dateline special on the same topics.

John Pollono wrote and directed the film, and also stars as Frank, a Forty-something dude who runs a small repair shop in Manchester, New Hampshire. He has raised his daughter, Crystal, who is now bound for college. Crystal's mother has been in and out of their lives due to drug problems since Crystal was born. Frank's raised her on his own with the help of his childhood buddies. After a first act that deals with his relationship with Crystal and her mother, we get a time jump, and the second act is mostly just Frank hanging out at his shop after hours with his buddies, drinking and doing some drugs while reminiscing. And it's just a lot of hanging out before Pollono decides to pull the rug out from under us.

One of the problems is that it's not all that good at being a hang-out movie. It's way too formless. I can accept that there is essentially no plot, but there should at least be some character beats; what does this friendship mean to these three guys, what's the point of watching them hang out? The twist would be more effective if we could settle into it as a breezy male bonding picture. As it is, it always feels like we're waiting for a shoe to drop.

The two friends are played by Jon Bernthal and Shea Whigham. Both are fine actors, but it was a mistake to cast such recognizable character actors amidst an ensemble of otherwise unknowns. The casting detracts from the local color we would get by being able to sink into the lives of ordinary Manchester folk. It switches the focus to the performative aspect to the scenes, and comes off as stagey.

Pollono is also too restless with the edits. As the men are hanging out and telling stories, he needs to let us sit with the character, invest in his storytelling. Instead, he insists on extremely short takes, unnecessarily cutting from speaker to reaction shot to another reaction shot back to speaker, then to a shot from a flashback reenactment of the story he's telling, back to the teller. It's like a Michael Bay film with the shot length, and shows a distrust in the material.

And then it becomes a different film entirely. It's a lot of wind up to a revenge fantasy that just feels forced.