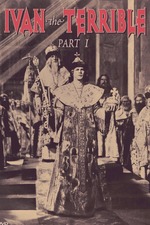 *The film journal, Sight & Sound takes an international critics poll of the greatest films of all time every ten years. The latest installment is set to come out next year, so I thought I'd catch up with all the films that made their previous seven top ten lists. This time, it's Ivan the Terrible, Parts I and 2, a pair of historical epics made by Sergei Eisenstein. This movie the top ten list in 1962, coming in at number 6, tied with Bicycle Thieves and Eisenstein's other great film, Battleship Potemkin.

The first part came out in 1944. Commissioned by Josef Stalin for his appreciation of Tsar Ivan, though Stalin apparently soured on the film due to Ivan's depiction. The film is bold and sumptuous. Seemingly every frame is a marvel. Though the fingerprints of Potemkin are easy to spot, the visual style actually reminded me of a different silent masterpiece, Carl Dreyer's The Passion of Joan of Arc. The carefully staged, highly expressive close ups of all these angry, suspicious men was for me reminiscent of Joan's trial. It depends on a style of acting that sprang forth from the silent era but we never see it any more. Our minds have been reprogrammed by the method era, and we instinctively reject such elaborate, affected expressions, but that's a shame because it's glorious.

This movie is a lot the history plays of Shakespeare. While similar in many respects to his tragedies, but instead of a tragically flawed protagonist who represents some version of human nature, the central figures here represent an entire nation. The rulers embody in some ways the aspirations that make a people great, and the proclivities that prevent the nation from fully realizing its full potential. Ivan is devoted to his land, driven to unite Russia, honor its commoners, and help them rise above the factitious and powerful noble families that keep Russia separated. Yet, Ivan is also highly ambitious, power hungry, and prone to alienate friendships, and eventually suggest the dangers of populist nationalism.

The film presents its struggles externally and internally. The external war is an expansive war with the Tsar's adversaries in Kazan, the siege of Kazan being a spectacular centerpiece of the film. But the internal struggles, the plotting and the machinations back at the castle are perhaps even more captivating. Eisenstein manages to make the cavernous old castle look at once spare and opulent, with its layered and maze like rooms and corridors, and the impressive use of echoes and shadows.

Ivan the Terrible is in some ways a character study, but it never settles for being about just one guy. It's a movie of epic grandeur. It's about the wielding of power, in ways great and small. It's also quite riveting, and stunning to look at.