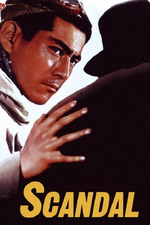 Akira Kurosawa seems to be indulging the anger he feels toward tabloid media with his 1950 drama Scandal. That's an enticing, juicy target. I just wish Kurosawa had approached it with anything close to his normal level of insight and skill. Instead, we're left with a bland, one-dimensional courtroom drama. There are a few bright spots and redeeming moments, but in spite of those, this is for me, the weakest of the Kurosawa films I've seen.

Toshiro Mifune plays Ichiro Aoye, an artist who's developed a reputation as the motorcyclist who paints beautiful portraits and landscapes. While out in the country painting a mountain landscape, he encounters Miyako Saijo, a famous singer played by Shirley Yamaguchi. She's missed the bus back to the local hotel, so he offers to take her there on his motorcycle. They meet for tea at her hotel room, in a completely chaste and platonic encounter. Nevertheless, they are spotted by some local paparazzi. They catch a picture of them, which is then used by the Tokyo tabloid Amour to frame their encounter as a love affair.

Aoye is later approached by a hapless, broke attorney played by Takashi Shimura. This attorney, Hiruta, wants to represent him in a libel suit against Amour. Though Hiruta is weak-willed and corrupt, Aoye decides to hire him once he discovers Hiruta cares for a daughter stricken with tuberculosis.

Mifune does the best he can with a rather straight-forward role as righteous, uncomplicated hero. There is perhaps a veiled reference at his homosexuality, but maybe I'm just projecting. Other than that, he's pretty dull. There's a great supporting role by Noriko Sengoku who plays a feisty friend and model of Aoye's. The best stuff in the movie comes from Shimura, who is the only character who has serious moral failings to overcome.

It's too bad that Shimura's performance is only in service to a run-of-the-mill courtroom formula: the down-on-his-luck lawyer up against a giant in the profession, all the testimony going against him and the case seemingly a lost cause until a last-minute stirring speech turns everything around.

What makes matters worse is that the stakes are so low. Sure, the magazine made up a false story and they were wrong to do so. The celebrities have every right to be angry and there should be consequences. Yet, what's the big deal? Neither of them are married. Who cares whether or not they had a date? Even Aoye, when he's refuting the story states says, "If I were having an affair with such I beautiful woman, I'd just say so." Now, it's entirely possible, that I, as a 21st Century American, just don't understand the cultural mores of Japanese culture in the mid-Twentieth Century. Fair enough, but the film doesn't depict much higher states. These people aren't that scandalized from what I could tell. The publicity seemed to help their careers, they were just annoyed that the publicity is based on a lie.

I suppose that's fair to be upset about. Because of a scandal rag, people think they're dating but in reality they're not. I guess I'd be annoyed too. But it's not going to get me on the edge of my seat as these lame court scenes play out. People are still gonna gossip whether they win or lose.