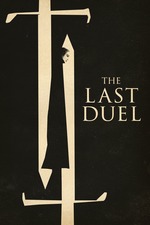 The latest Ridley Scott epic is about a rape accusation in 14th Century France which prompts the last legally sanctioned duel. Jodie Comer plays the victim, Lady Marguerite, who is married to Sir Jean, played by Matt Damon. The rapist is a squire named Jacques Le Gris, played by Adam Driver, a one-time friend of Jean. Their friendship had deteriorated due to several small grievances that arose as Le Gris curried favor with the local Lord (played by Ben Affleck). I will forego using the qualified "alleged," as the film is quite clear that Le Gris is guilty. I don't think this is much of a spoiler, but I'll hit the tag just in case.

The events leading up to the accusation are told first through Sir Jean's perspective, then we see them through Le Gris's point-of-view. Finally, we go through it all again with Marguerite's point-of-view. Each section is introduced with a title card, "The truth according to ___." I will avoid comparing this to a certain Japanese masterpiece that I was already planning to watch again this weekend. It's not fair to hold a new release up against one of the greatest films ever made. So then I will also avoid reference to a certain news magnate opus that currently sits atop my LB favorites.

There are plenty of run-of-the-mill movies that use the technique of telling the same story through different points of view, like Vantage Point, or Snake Eyes. But even there, I don't think the comparison is favorable to The Last Duel. This technique is most effective at showing the difficulty of getting at the truth. But that's not what this film is about. This is an unabashedly feminist film (or at least it tries to be), that shows how institutional misogyny prevents a woman from having her voice heard. Seeing things from the POVs of a rapist and a douche bag don't further that end. It just forces us to watch her get assaulted over and over and over again.

Look, I think it's great that this movie wants to take #MeToo and #BelieveWomen and apply them to the Middle Ages. These are important concepts that deserve to be aired out in their larger contexts, not just relegated to trendy buzzwords of the moment. Misogyny has been built over centuries. As such, I think this movie would be better served by allowing her to be the center of the story rather than playing games at being Rasha-- err . . .Vantage Point.

Case in point, there's a couple of scenes in Marguerite's section, in which her husband is a way fighting battles. She's left at home and starts looking into his estates, which he's badly mismanaged. She gets all the finances in order, collecting taxes (while still showing sympathy for the needs of the poor). Then she shows her skills at animal care, and then at increasing crop yield. Had the movie focused on her the entire time, we could have learned more about her interests, learned where she acquired these skills, so that, when this need arises, her rising to the occasion is a character-building moment. Instead, we only get this stuff in contrast to the oblivious husband and the arrogant predator. It comes off as silly Girl Boss pandering. Rather than her being good at these things because of her studies or her efforts, she's good at these things because girls rule and boys drool. I would so much prefer a movie about a specific character with thoughts and interests and develops skills through her intelligence and perseverance, rather than this pre-Renaissance pixie dream girl who is an expert in literature and arts and finance and land management and horse training and animal husbandry and agriculture.

I'm sorry to be so negative on a movie that really does have good intentions and is about serious and important issues. But too much of it comes across like a corporate training video. The actions and dialogue exist to exemplify wrong think rather than portray what these characters would actually say and do. An official says smugly that science tells us a child can never be conceived in a rape. That's a pointed jab at a former Republican Senate candidate, and believe me, that candidate warrants that criticism. But no one in 1390 France would regard that as a matter at all related to science. When Le Gris defends himself, stating that her protestations were a show of decency and she really wanted it, it's a defense that's predicated on consent being at issue. No question that this is behavior that needs to be called out, it just sticks out in this framework.

The problem that I have with the movie is it is so preoccupied with right-think that it ignores the woman at the center of the story. Perhaps it was ill-advised to have major part of the creative team be guys who owed their careers to Harvey Weinstein.