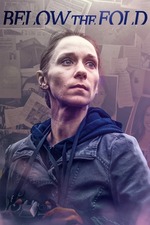 Pretty messy review where I’m just gonna note the things that stood for me. // SPOILERS //

TDLR; over all it’s not a bad movie but just one of those ‘’meh’’ watch where there are nice elements but the whole thing feels undercooked.

----------
1. Lisa is the best character between her and David. David is not useful at all and actually hinders the story in a few spots, could be a wallflower and the film wouldn’t change much really.

2. Sad to say but they are dumb reporters though. That interrogation with Mr. Derrach? No hidden microphones? No more investigating BEFORE actually confronting the guy? Not using a third party to get to know the guy better? *smh*

3. Head reporter (Jason) is a one dimensional character who’s whole deal is serving as an obstacle for the investigation. Unpleasant at that. And I’m sure there’s plenty of unpleasant, uncooperative bosses around in the world. But I don’t believe this is making the movie better. They could have just have him express doubts over their whole thing. Or better yet, focus more on the ‘’hostility’’ from the townspeople of Skidmore. But because Jason has 0 nuance we’re basically just watching confrontations with him that lead nowhere, just padding the movie’s running time.

4. Talking about things that add nothing to the story, there’s also the past fling between Lisa and David. Not anything to say about it really, as it is entirely irrelevant. Could just have the 2 been close friends and Lisa cutting David off from her life at some point and it’d be the same.

5. It was pretty obvious that the Derrach lead was a red-herring and that Donovan was fishy. Not necessarily a bad thing in a movie where it’s established early on that people can be pretty paranoid, react badly to any form of scrutiny and drama or seek ways to be petty to their neighbors, but a little too obvious for my taste.

6. The mention of Ed Henry’s relationship with a minor (Jessica, 2nd victim) is not even given a 2nd glance and I’m honestly flabbergasted by this. Like okay? I guess it’s not relevant in a movie where the protagonists are getting to the bottom of why young girls were murdered and where we find out it was because of adults abusing a power dynamic and getting inappropriate with them. /sarcasm

7. The adults (Mr Derrach, Donovan) remarking on the appearance and beauty of young girls / women is given scrutiny. It’s a nice touch, wish more movies would do that.

8. The ending is depressing yet entirely realistic. Still relevant to this day and age, sadly.

9. That quote from the Bible adds a whole nefarious tinge to it all, pretty dang chilling and sinister. That… kinda saves the movie from being completely forgettable if I’m honest.

10. We don’t ever get to find out why Lisa is so invested and emotional about the case. While reasons are implied, it can be left for interpretation and I appreciate that.