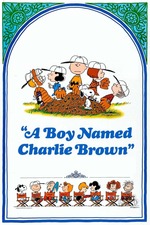 A film seemingly as complex and full of metaphors and symbols as the average art film. Visually interesting, utilizing well the pop art trends of it's time. The piano sequence especially stands out as being particularly inspired although the scene doesn't neccesarily add much to the film. In a way it gives a relatively simple and innocent film a drop of lovely blood that was surely needed. Charlie Brown's plight is an interesting one that he doesn't even win at the end.
The animation is clearly on the cheaper side. There are no shadows behind the characters as they walk, the enviroment doesn't move with the characters unless it's for a visual gag of some sort. The best example of this is the stiff swath of dandelions Charlie stands on top of, they do not interact with his feet in anyway. Despite this, i recommend all parents to show this to their children at some point. It's not about winning or losing that matters, it's about the act itself and the experience that goes along with the act. And of course we are all Charlie Brown, aren't we?

My Dinner with Andre