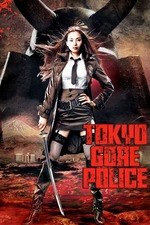 I've actually had this film on my radar for quite a long time, even before I had a passing interest in the medium: Every now and then some catalogues for new releases at Wal-Mart, K-Mart or some other department store would come in the mail and I'd occasionally glance at them to pass the time (I was bad at wasting time at the age of 13). This one stood out to me for whatever reason, but at the time I thought that I'd never bother watching it ever because horror was a huge "fuck no I'm not touching that shit" genre to me. Oh, how times have changed.

But... look, one of my least favorite things when it comes to exploring art is not necessarily finding something that I expected to like and ended up disliking (though that still sucks), but more finding something that should be something I love and give a 4.5 at the least on paper but ends up being just OK in the end. This is another film to add to a non-existent list of ones that combine two of my favorite things, gorgeous visuals (this has some of the most weirdly beautiful bloodbaths I've seen on film, and a decent chunk of the rest is still tinted with striking colors, not to mention the wonderful body) and being completely batshit insane (seriously there's a 5-minute span halfway in where I witnessed both alligator-mouth legs and a giant dick gun), and yet I felt strangely underwhelmed by this one and I'm not quite sure why.