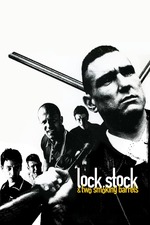 What a fun ride! Guy Ritchie’s feature length directorial debut follows the story of Tom, and his friends Eddie, Soap, and Bacon and their escapade to pay back 500,000 pounds to a mob boss after Tom leaves a card game in which he bit off more than he can chew.
Guy Ritchie showcases his talent as one of the more underrated screenwriters within the last 25 years as he makes an overlapping story of several different heists and underworld bosses wanting revenge incredibly easy to follow. This film definitely does require the viewer’s attention throughout or you/the viewer will become lost, but, don’t slack off and give this film the attention it very well deserves despite its lack of commanding presence like one of his later films ‘The Gentlemen’ and it will most certainly pay off later.
Despite the lack of commanding presence, my biggest issue with this film is how yellow, and muddy the cinematography is, which I personally feel is the leading cause of the aforementioned lack of engulfing and enticing the viewer right away. With that being said, I really have no gripes with this film. Within the last year or so I’ve been delving into “gangster movies” such as ‘The Godfather’, ‘Casino’, ‘GoodFellas’ and ‘The Gentlemen’. Rekindling my fanfare for this particular type of film that I often found boring and confusing as a kid, ‘Lock, Stock, and Two Smoking Barrels’ is high energy, loads of fun, and I can’t put enough emphasis on how easy Guy Ritchie makes this film to follow.
I loved ‘The Godfather’ and ‘GoodFellas’ however, they may require a view or two to remember all of the characters whereas ‘Lock, Stock, and Two Smoking Barrels’ doesn’t suffer from the same issue. It may not be quite to the level of Tarantino’s directorial debut of ‘Reservoir Dogs’ but this film is definitely one of the stronger debuts I’ve seen within recent memory.
The score was easily the weakest aspect of the film aside from the semi-ugly color palette, but this film exudes so much energy and confidence in itself that the minor flaws it does have, are easily forgiven. ‘Lock, Stock, and Two Smoking’ barrels only has a 75% critic rating on Rotten Tomatoes, which was surprisingly better than I was expecting them to rate this film, but also a damn shame they didn’t rate it higher. 75% is generally regarded as just above average, and for it being Ritchie’s first feature length film, that is able to combine the fun of a comedy, the action and inspiration of a heist movie combined with the style of a “gangster” movie, ‘Lock, Stock, and Two Smoking Barrels’ was well worth the $5 I paid to own the film before I’d ever given it a viewing.
My personal rating on this film is a 9/10 and I would highly recommend this film to anyone who hasn’t seen it yet, as it has definitely solidified itself as one of the most underrated films of the 90’s which I personally think is one of the most glorious eras of movies!

As always, have a great day, and an even better time at the movies!