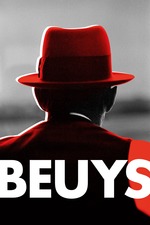 I'll be the first to say that my knowledge of modern and performance art is pretty sketchy, so I can't really contextualize the subject's significance or the innovation of his contributions.

Overall, I found Beuys the man to be charming, dynamic and constantly intellectually engaged. I'm not as much a fan of his art, as I don't share his obsessions with fat and felt (and can't quite make the metaphorical leaps he apparently wants me to).