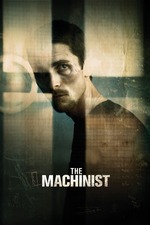 Chrstian Bale does a phenomenal job at playing a skeleton.
Christian Bale also does a phenomenal job at playing skinny guys, muscley guys, psychopath's and fat, flabby con men (american hustle).
From the minute the machinist started I knew it had a memento feel to it (the movie isn't entirely in order) and a fight club feel to it (the tone and the darkness). The machinist is one of if not my favourite Christian Bale movie, its got phenomenal performances (no need to mention Bale again) and has huge surprises at every turn (like fun) its so much fun and surprisingly entertaining, Christian Bale is probably my favourite actor, this is a guy who can act any part, do any accent and change his body (fast!) He is one hell of an actor who dedicates a lot to his role's. I don't want to spoil anything about this movie I just want each and every one of you movie lovers reading to see it if you haven't already. This is one of my all time favourite movies and even though it gets praised quite a lot I do find it underrated because I thing it deserves triple that praise, also a cool fact about this movie it was made the same year as batman begins (yeah that movie were Christian Bale was a buff bad ass). So overall the machinist is perfect, five stars.