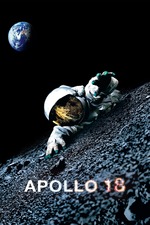 Apollo 18 is a movie that is hated by most people that have seen it and honestly, I get it. It's found footage, it is in space, it builds upon real event instead of coming with an original story. I get it.

However, if you really watch it with impartial eyes, it is not that bad. Most people are annoyed by films like Apollo 18 because they either are "brainwashed" to dislike every film that uses that type of narrative or expect every film to be like the Blair Witch Project. This is a short, quick paced film, that in is no way Alien, but plays by the rules and while it doesn't create thrills and scares it has your attention. The acting is decent and I didn't find the gimmick to be forced at all. The moon setting looks surprisingly real as well.

Are there any better movies in the same realm? Of course, but does that mean that Apollo 18 is trash? Hell no, give it a chance people.