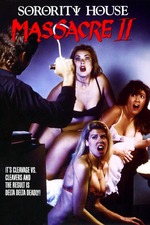 Sorority House Massacre 2 is the drunken one night stand of the movies. Director and B-movies underground lord, Jim Wynorski stumbled upon a movie set used for the first Sorority House Massacre, asked for permission from the set owner's wife and she said yes but her husband cannot find out. Then Jim like the player that he is, gathered cast and crew, shot the movie in just seven days and was out of the crime scene before the husband catches him red handed.

Surprisingly, this was better than it was supposed to be, it clearly showcased Wynorski's talent. He made a flick from virtually nothing, just 4 below average actresses, a bad lighted set and some pounds of fake blood. I mean the budget for this movie must have been 10$ for a couple of strobe lights to simulate the thunder, and a bottle of tequila which the girls are drinking in the beginning of the movie. This is a funny movie, a perfect example of so bad it's good. They eye helps a lot.