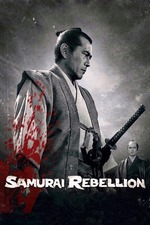 It's apparent, at least from his most celebrated works, that Kobayashi's main goal is aiming to demystify, or outright condemn the structure his birth country used to build its modern believes on. The samurai set of rules informes much of the core values, involving honor and gratitude among other virtuous characteristics, that are being echoed throughout the Japanese system, from politics and office work ethics through schools to customery services. This film, however, states: this is all a farce, a ville construct for a "chosen" few to bully the rest into unfair submission.

This time, a new voice emerged to vocalize her concerns. A woman, for so long, in so many works, sidelined to the role of devoted support to the revolting man, breaks the usual status quo to express frustration to the unjustly methods she is being subjected too. While the film never goes fully with the feminist themes( correct me if I'm wrong on this one), having Toshiro Mifune as the main decision maker, Ichi, the countering concubine and the woman in question, remain the movie's emotional core, and Kobayashi is allowing her to have moments to explode her channeling, barely noticable rage, a chance to revolt, to say no to the unjust conditions she's been put through, even if the powers in stay will do anything to crash the uncompromising spirit. She is the spark that transforms Isaburo from a gruff, worndown samurai to a warrior pulsating with fire. It's her counter culture conduct that starts the rebellion going. And what a rebellion it is!

What has been set up in Harakiri, and continued with Kwaidan is fallowed through here, and that is that Kobayashi is a technician maverick of staging. For the longest duration of the runtime the film is composed of unimposing, stilted shots that allow the dialogue to flow freely and cut deep, facial changes guiding the emotions, while the tension slowly accumulates before everything implodes in the finale. The wast house, where most of the film takes place is reduced to its mere foundation, a minimalist space of transfixing squares that embraces free movement through space, and compliments a cathartic bloodbath with devastating consequences. Fuelling the foul mood even further is the confrontation between Mifune and Tatsuya Nakadai's character, the protagonist's life long best friend, sharing his dissolutioned world view about the daimyo but being unable to confront the real enemy, a bitter conclusion to a powerful thesis against structural power. What is left is lament with a dying breath and a child ready to carry on a revolutionary fight after witnessing a final tender moment between decieased friends/rivals.