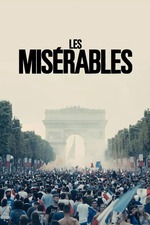 A really pleasant surprise. Les Misérables is not an adaptation of the classic Victor Hugo novel, but it very much feels like a modern snapshot of today's France, where the poor hustle for a living, ethnic minorities are heavily subjugated by the system, and police officers abuse their power. The first two thirds of the film are terrific, a blend of buddy-cop chemistry between a rookie and two veteran corrupted officers, while also showing the situation in a Parisian suburb where kids are growing amidst crime and poverty. This section has a really solid ending, the culmination of multiple tense and funny sequences, but then it has an elongated epilogue that, while tense, thematically appropriate and emotionally powerful, still felt like it was slightly unnecessary especially since it peaked earlier and the momentum was lost. Really clever dialogue and great performances all over the board though, and Ly is a director to look forward to.