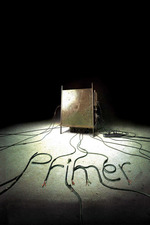 I really have no idea what i saw and what I understood.

Ok lets start, a bunch of guys(4) are making stuff in one of the guy's garage but they don't seem to make money out it. So they argue about stop making it or something. The 2 guys wants to still make it, so does the other 2. Then the other 2 somehow make something while they were trying to make something(else) ?.

Now I am stuck at the beginning ... WTF were they making in the first place ??

*Lot of stuff doesn't make sense for some time.*

Then we see another guy who looks like this other guy going somewhere with a gas-tank for some odd reason. And lot of talking and they go inside to find something big that was something small sometime ago. Then they both go in bring two cars, hide one so that they can take only one and then go to a hotel room and stay disconnected from everyone. They do this for sometime and think of making money ?? Then suddenly someone was there with a shotgun somewhere and they want to do something. Then someone with a beard follows them, while someone without the beard is at his home ? They go all ape-shit and then realize there was some backup stuff and one guy was recording conversations. Then they want to frame somebody and do something involving the previously mentioned shot gun and repeated trial method or something. and then the guy with the shotgun finally comes and they want to steal their own passport to go somewhere ? while the other guy wants to stay here.

Now is it just me ? Or does this movie make any non-sense ??

Oh then comes the interesting part of it all, this was "interestingly thrilling". I wanted to watch the whole stuff, while my mind was being fucked multiple times. Guess i got fucked pretty bad.

I'm going to watch this again today, It might make sense then.
I'm giving it 2.5 stars , it had me interested in it for the whole movie.