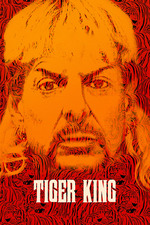 When the inevitable movie adaptation of Tiger King starts being made, the only filmmaker that I’d consider being able to pull it off successfully would be Harmony Korine.

Tiger King is one of the craziest and most unpredictable documentaries that I’ve ever seen. I was hesitant to watch the series at first, mostly because I can’t motivate myself to watch shows in the same way that I watch movies, but once I started the second episode,
I couldn’t stop. Along with its unpredictability, one of the strongest aspects of Tiger King is the fact that it doesn’t side with any of the parties involved. Everybody from Joe Exotic, to Doc Antle, to Jeff Lowe, to even Carole Baskin is portrayed as either power hungry, a hypocrite, an egomaniac, or a combination of the three. It’s a fascinating and addictive watch that I can’t recommend enough.

“Carole Baskin killed her husband” is the new “Jeffrey Epstein didn’t kill himself”.