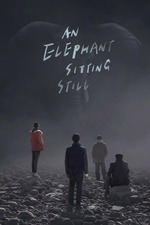 Clocked in at almost 4 hours, we watch four different perspectives gradually merge into one mournful viewpoint of societal collapse and subsequent alleviation in finding solace in the apocryphal tale of an elephant sitting still. Hu Bo’s novelistic contemplation feels like something we are not supposed to be seeing - it is too personal - with the display of the deterioration of the mind(s) and soul(s) here is, simply put, staggeringly cruel, as it allows the hopelessness to morph itself into a distinctive cry for help. The constant lingering, free-floating atmosphere makes for a deeply pensive mood while the Steadicam closely tracks each character from behind as they stroll, and with that, creating an absolute claustrophobic effect, slowly everything around them becomes out of focus. They start to go adrift in the coldness of labyrinthine Jingxing County, where carbon monoxide pervades the breathing air, on a tumbledown pathway that leads to nowhere. Because everywhere is just going to be the same, blanketed by a murky winter of post-apocalyptic vacuum.

An elegy to the void spoken into an empty well, so empty you can hear your own thoughts echoing and reverberating back twice as hard. It is difficult to fathom the immensity of it all, of how the world is limitless yet at the same time, remains an industrial ruin of brutal despair. Every part of it is putrefied and every flesh rots. I'm not sure that I liked what I saw. Like is not the correct word but the most appropriate thing to say here is I admired what Hu was depicting. There is not one spark to brighten the screen, not one fleeting second of joy to scrub away the bleakness of this lugubrious affair. Nevertheless, be sure to stick through it until the end, because by then after having gone through the lowest of the low, you’d be able to see a mirage in the dark. A miracle perhaps, as the elephant cathartically trumpeting in the night to tell you it’s more than just a mere glimpse of illusion and signifying that there is still something to grab onto.

Whew, I am tired.