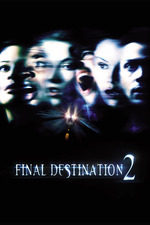 This is so hard because this was the entry I used to watch the most when I was younger, but it's aged like milk imo; the material is great, really clever writing and definitely improved kills over the first but what is missing is the unique tension and atmosphere that the original had. Besides Ali Larter and a few of the supporting cast, it was executed pretty averagely, cringe inducing in some parts and it came off like a really subpar made-for-tv movie. Beyond those issues, it's paced nicely, never boring and liked the dynamic between characters. Solid sequel, which I think is drastically improved in the third entry.