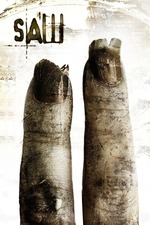 “Oh yes. There will be blood.”

Wow was this worse than how I remembered it. There are at least some improvements over the first one in that the acting is a lot better than the first one that doesn’t have any inconsistencies. The score has less metal music which was a plus from me since it didn’t fit with the film, and this one felt more like a complete film that doesn’t show its low budget like the first one. Donnie Wahlberg gave a great performance that shows his desperate mannerism to do anything to save his son. The practical effects look a lot better that does ante the gore effects a bit that is closer to the Saw film and we all know and love when seeing all of the films.

When it’s just John Kramer (Tobin Bell) and Eric Matthews (Donnie Wahlberg) talking, it’s the best part of the film because it’s a way for us to figure out John Kramer’s methods of how he became the Jigsaw killer and why he thinks the way he does. Every time I get effectively cringe when I see the “Needle in a Haystack” trap because I hate needles so much, it always works from that perspective.

The traps they used for this film are just as creative as the first one, but the Venus Fly-Trap feels like a slight carbon copy of the Reverse Bear-trap. The film does give us some characters to root for where we’re curious to know where the characters’ mindset is when playing these games, but there wasn’t enough characterization for all of them as some are just used as bodies. We did get a hilarious transition from one room to a crime scene real quick, but there weren't any transitions that go from that kind of approach as this was taken more seriously than the first one.

It’s a bit of a double-edged sword because it doesn’t have as much unintentional hilarity as the first one that works as an advantage to the film, but it also ruins the fun of making fun of the film and when it’s not as quick as the first one, it tends to drag at some points. Some decisions the characters make can be way too stupid for me to comprehend what just happened, and the twist ending they had was eh at first, but when you think about it, it doesn’t make sense. What led to that is funny because it was just luck that works just the way it is that the plan has all come to motion with no issues to deal with. Saw 2 remain to be interesting that has some things going for it that don’t make it feel like a torture-porn film just yet, but it drags a bit that doesn’t have as much fun going for it as it wanted to be.

Unedited Footage of a Bear