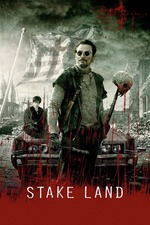 When it comes to vampire films, it’s hard to find one because there aren't that many vampire films out there that are not scary or even good. So from what I remember in my first viewing, this was one of the better ones I’ve seen that caught my eye on Jim Mickle as a director. So when going at it, there wasn’t to tell when revisiting it whether Stake Land is going to be good or not as it’s The Road but with vampires. To my surprise, it remains to be a solid vampire film.

Nick Damici improved himself as a main lead that plays a man of mystery that only likes to be called Mister so that he won’t get emotionally connected with anyone he meets if he ever used his real name. He has the badass feel to his persona that makes it very clear that he knows how to deal with the world that's surrounded by types of vampires. Connor Paolo did a great job as an inexperienced kid that has no idea how to kill any vampires, and he ends up being an orphan that’s protected by Mister.

Kelly McGillis could’ve easily played an annoying character that is very religious and has no idea how the world works of vampires taking over, but she works to the film’s story as she tries to learn about what she goes through, and she’s like a mother figure for Martin (Connor Paolo). The effects are mostly practical, and they are impressive to look at with some great gore effects as well.

The make-up effects of the vampires look creepy as hell that boosts the effective atmosphere up. For a small budget of $625,000, the locations they’re in look convincing that makes this feel like an apocalyptic world they’re living in. The action scenes are entertaining to watch, and the score gives a relaxing feel that can make the film feel depressing to go through because of how empty the world is. The film can be creepy at points, and when it did a jumpscare, it got me.

The issue that the film has been that some of the scares are not all that effective. Some of the screaming sound effects are not only very stocked but also silly which took me out of the moment. When Sister (Kelly McGillis) went through a religious fanatic group, she acted like she was ok and was smiling although it seemed like she went through some horrific situations. The climax they had for the film was such a wasted opportunity because it lasted way too long, and was lame in how it was executed. Other then that, Stake Land was a fun time that knows how to make a vampire film work.