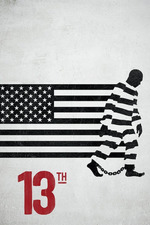 With 13th, writer-director Ava DuVernay presents a thoroughly persuasive and artfully crafted argument that a clause in the 13th amendment to the Constitution—that slavery shall not exist in the United States “except as a punishment for a crime”—has been exploited to employ mass incarceration as a tool since the Civil War for the further oppression of Black citizens. An impressive array of African-American activists, intellectuals, and politicians are brought in to make the case, which DuVernay frames as one cohesive, coherent manifesto. Rather than give each person their five to seven minutes, she weaves a few sentences from one speaker directly into the thoughts of another, lightly jumping from one commentator to the next, creating a chorus of consensus. Powerful and hugely disturbing historical images bolster the documentary’s thesis, including a chilling montage of then-candidate Donald Trump’s race-baiting language (much longing for the “gold old days” and “law and order”) layered over images of his most rabid supporters shoving and punching African-Americans. These are then interwoven with news footage of nearly identical abuse taking place during earlier eras. 13th might have benefited from a stronger conservative counterpoint (Grover Norquist and Michael Hough, a clearly in-over-his-head Republican senator, bring little to the table). But then again, I’m not sure much of a retort could be made by anyone. The historical record, meticulously laid out here, speaks for itself.