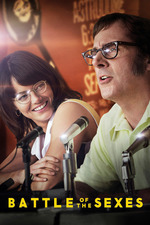 after falling in love with little miss sunshine and subsequently hearing that ruby sparks was a bit of a misfire, i was very interested & excited about this film. battle of the sexes certainly doesn't have the same chaotic energy as little miss sunshine, it doesn't ever delve into the same realm of darkness or introspection on mental illness/dysfunctionality. in fact, i'd be more apt to suggest that this directing duo made i, tonya which had a lot more of the same ruthlessly dark humour and exploration of oft-neglected topics.

rather, battle of the sexes is shockingly... soft. it's a very soft and lovely kind of film. despite being full of color and life, it's permeated with a quiet intimacy that leaves an impact. at the focus of the film is jean's relationship with marilyn, and their scenes are crafted so carefully that the film more often than not treads on romance territory genre-wise. from the first scene of jean getting her hair cut to every subsequent scene with her lover, it's filmed so dotingly and gently that the relationship borders on overshadowing jean's rivalry and impending titular match. it's incredibly sensual without ever feeling exploitative or even intrusive, something i'm sure was wrought with the help of a female director.

despite the pointed focus on these two, the moments we get of the other characters are almost equally delightful. jean's team is lovely, and carrell gives a pretty stellar performance as bobby riggs, who develops as a compelling character. riggs isn't just "the villain", in fact, he isn't even the mindless chauvinist he bills himself as. i'm far more interested in a man who would exploit women's struggles to hype up an event that could mark his reentry into the world these same women have always been barred from than a guy who's just a plain dumbass woman hater. riggs knows what he's doing, and doesn't believe any of the basic anti-woman vitriol he spews, his hatred of women is far more insidious. he's playing out the act of simple-minded toxic masculinity thinking that he's truly scot-free on equality and merely making a show for publicity, but the truth of his superiority complex runs deep in the way he interacts with women. from his mannerisms around jean and his wife to his flippant attitude about the match his livelihood clearly rests on, assuming his win automatically.

overall this film is so.. pleasant? it's ritzy, bright, and flamboyant exterior melts to a simple and touching story of a woman finding herself and making milestones for all her fellow women along the way. battle of the sexes nails a very unexpectedly sentimental kind of feel-good, soft and emotional only laced with comedy. 2017 has officially done something remarkable- made me care about not one but two sports films