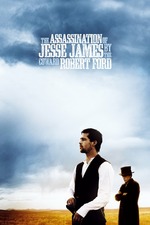 The Assassination of Jesse James by the Coward…

The Assassination of Jesse James By the Coward Robert Ford is a long, quiet examination of the final days of the legendary outlaw hero. It is purposefully slow, but by doing so, seems more like you yourself are placed in the old west. I could almost smell the mud. The further it goes, the more tension-filled it becomes, building to the event in the movie's title.

Casey Affleck is great as the Jesse James fanboy-turned-assassin. At times you find him to be a terrible person, other times, you feel sorry for him. Brad Pitt, in what he himself calls his favorite of all his movies, is a simmering presence. His Jesse James seems tired, weary and resigned to his fate. I mean, why take your guns off just to dust a picture on the wall?

The direction by Andrew Dominik is next-level. He wants you to really feel like you're there as well, long lingering shots that stay on screen longer than usual. Makes you wonder if he masturbates to Terrence Malick movies, specifically Days of Heaven...?

Roger Deakins has done some of his best cinematography here. Beautifully staged scenes to take your breath away.

Upon rewatching this, I couldn't help but recognize a certain piece of xylophone music in the score bore a striking resemblance to the TCM music played before a movie on that channel. It's called, "Song For Jesse" by Warren Ellis and Nick Cave. Mystery solved, I love that music.

Possibly not for everyone, this movie is quite long and not a lot happens for periods at a time. I admit to watching it in chunks this viewing, although I watched it all at once the first time.

The Dark Side of the Sun