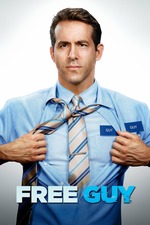 The worst film I've seen in a cinema all year, bar none.

Insufferable, corporate garbage seems to be a trend this year and Free Guy is no exception to the rule. Hollywood attempts to replicate the success of Grand Theft Auto Online by completely missing the point of online video games and recycling the plots to The Truman Show and The LEGO Movie but having funny man Ryan Reynolds say “virginity” over and over again because that’s good writing.

Free Guy gives you nothing to latch on to, as none of the humour landed in the screening I watched and none of the action was impressive, only reminding me of the countless MCU films where the action setpieces are created prior to the actual plot of the film, it's infuriating. Again, there's a complete misunderstanding of what makes these online games popular and shoving Ninja, jacksepticeye and Pokimane into the world doesn't make it any better. Just because you've placed [x] internet personality into the film, doesn't make it any bit more believable than it was before.

Why take a video game aimed at players over 18 and created a shitty PG-13 studio mandated, audience focused, test screened to oblivion film that doesn't offer anything new or interesting to the mix? Why use licensed music such as a Logic song, when it doesn't fit the sequence whatsoever and then have the utter gall to replay the ENTIRE FUCKING SONG less than 20 minutes later in a montage sequence?

Free Guy treats the audience like the one thing it's sorely missing: jokes. It's grating to see Ryan Reynolds play the same character in the 15th movie in a row over the last 6 years and I'm more fatigued of his style of humour than I am watching superhero movies. At least you get the odd interesting film like The Suicide Squad from them.

Walking out of a film is not something I do all too often, I'll subject myself to some absolute dumpster fires like Space Jam: A New Legacy, Epic Movie and even shit like Cherry, all of which I despised from the confines of my own home. I could have turned it off, but my morbid curiousity got the better of me. But fuck me, Free Guy was a film I wanted to stop watching after 20 minutes. I tried my best but when a poorly shot action sequence showcased a character teabagging another character in game, I lost all good will I had with this film.

By far the worst Screen Unseen film yet, and they had such a good track record too. If you enjoy the lowest common-denominator style of humour that Free Guy is going for, more power to you. I salute you for sticking with it, I applaud you for watching it all of the way through and I'm jealous you were able to get something positive out of the experience.