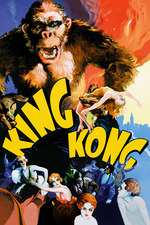 King Kong, The Eighth Wonder Of The World.

Simply put, if I never discovered Godzilla and my love for giant monsters as a very young kid, I never would have found King Kong. I probably never would have been the person I am today. Godzilla directly led me to this 1933 classic merely a year later (to my best recall). I was beyond captivated by this mysterious Skull Island filled with dinosaurs, beasts, and the great Kong himself. If Godzilla taught me lessons in life on the shocking cruelty of humankind and how we should treat each other better, not make war. Then King Kong taught me lessons in life on how we should treat animals with love and respect, not exposed or used for profit. I am aware, unfortunately, that this film has been mentioned numerous times to be a metaphorical product of racism. And, well not the good kind. Kong, the black beast from an "ancient mysterious land" whom the small minded racist white folk invade to enslave and, eventually put to rest once the captive attempts to roam free in a land unknown to him. While falling for the "white girl". During the 19th and early 20th century, people of African descent were often represented as ape-like. A metaphor that fit racist stereotypes bolstered by the emergence of "Scientific Racism. So if this genuinely was the thought process from the filmmakers at the time then I obviously absolutely can't condone it. 1933 or not. But I've rarely seen any mention of it at all in the various special features or clips discussing the movie. And to my knowledge the directors among others shut down those claims when presented to them. So unless it's been swept fastly under the carpet over the years, or that wasn't the original intention. I'd like to think that it's metaphorical for animals in captivity used for entertainment whilst being a Beauty And The Beast love story which this film drew inspiration from. Awkward as hell to talk about though am I right? Especially for a film that impacted me so deeply as a child 😅.

The film follows Carl Denham, a filmmaker known for his wildlife films and exotic locations, is desperate for a big break in his career. He catches wind of this 'Skull Island' myth, and forms together a crew under Captain Englehorn's ship to set sail in search of the island. While even casting the beautiful Ann Darrow as his main star and promises her the adventure of a lifetime. His new motion picture is set, until they reach the island. Natives offering brides to a mysterious giant monster, a huge wall that keeps them all seperate, it isn't long until their worst nightmares are realised and mayhem ensues! And it's a frightening journey through the jungle to rescue Ann from the giant Ape! And whatever threat lurks between the trees on the island.

King Kong is arguably, the first big cinematic blockbuster ever put on screen. Changing filmmaking history and influenced how people approached making movies altogether from then on. King Kong lit up like wildfire and took the world by storm! It was an enormous success critically and financially. Launching directors and producers Merian C. Cooper and Ernest B. Schoedsack's careers into the stratosphere. Despite their already successful work prior to the big ape. With help from Edgar Wallace on the story to his respect. With the special effects handled by the iconic Willis O'Brien who's stop motion animation made tidal waves, completely groundbreaking and some of the greatest special effects work credited in history. Even nearly a century later, it's still gorgeous and beautiful to look at. Truly ahead of its time and an influential piece of filmmaking for the future.

The human characters whilst entertaining and well acted, (Robert Armstrong being the standout) they are written a tiny bit wonky and at times, unrealistic. The romance between Ann Darrow and Jack Driscoll seemingly jumps from out of nowhere. Not long after Jack just insulted Ann for essentially being a woman, on a ship. Therefore insulting women in general. Then she's head over heels for him after confessing his "love" 😅 yeah the 30's were a different time 😂. The racial and sexist undertones are a shame. Thankfully the only big criticism I can give the movie.

The real star is King Kong. This loveable, powerful and misunderstood king of Skull Island who falls in love with Ann offered as a sacrifice. Treated like a mystical God by his people. Who would do anything to protect the woman he loves from the dangers of the island. Refusing to give her up to the ship crew that easily. As our crew face the horrors not only of Kong but other unknown beasts that tear them apart one by one. Every scene involving these miniatures interacting with our cast is so much fun and expertly made. The imagination is inspiring. And all the big monster fights between Kong and the creatures are peak entertainment. The fight with the Tyrannosaurus Rex being the most iconic, breaking his jaw then playing with it after making sure he's dead 😅 Kong's personality shines through into our hearts because he's more human than our human characters. He's innocent, proud, kind when unthreatened, and all round adorable. He doesn't know any better but to protect himself, his island and his love.

If the drama amongst Skull Island wasn't enough, we take another trip back to New York with a now captured King Kong in shackles, put up on Broadway for the world to see The Eighth Wonder Of The World. A disgusting act of human nature that's still a form of low life shit to this day. But when the beast Kong breaks out of his chains in self defense, desperately searching for his love, the sheer cinematic spectacle of watching a giant gorilla tear through New York destroying transport, climbing buildings, grabbing women from apartments mistaken they're Ann then dropping them to the ground below, is awe-inspiring. Breathtaking to a 1933 audience let alone in this day and age. Even amongst the chaos, we still sympathise with Kong. We're still on his side, we want to see him overcome the horrible humans who robbed him of his home world. Then, in one of the most ridiculously emotional moves in cinema history, King Kong climbing the Empire State Building with Ann in hand, similar to climbing the mountain to his home. But is met with aeroplanes open firing and attacking this giant, innocent creature. It's a sight infamous in cinema history, etched in our minds unforgettable until the end of time. Eventually through fighting with all his strength, King Kong heartbreakingly falls to his death to the concrete below... 😞 There is no happy ending in this fantasy. But stands as a cold reminder to the cruel nature of humanity that I loathe so much.

King Kong with all due respect, is a masterpiece. King Kong is a huge part to thank for almost everything we know in film today. Genuinely one of the greatest accomplishments ever made and over the years developed numerous metaphors to attach to the poor hairy loveable giant. Even a Kaiju film before Kaiju films were a thing. However you choose to look King Kong and what he means to you personally is up to you, but it's undeniable the impact this movie had on the world was felt in earthquakes. A deeply personal film to me that inspires me to this day and many fond memories since my young days paired with Godzilla. A forever classic. Thank you King Kong 🥺❤️

Oh No.. It Wasn't The Aeroplanes... It Was Beauty Killed The Beast. 💔