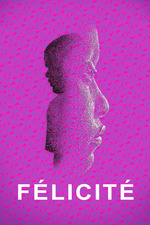 "Even night has two sides." Thrums with energy from the opening club scene—conversations on violence and drunkenness give way to ecstatic movement, sensual and shadowy, with Véro Tshanda Beya's stony gaze at the center. A woman "too tough for her own good" forced into a Two Days, One Night-scenario, though one less delineated and schematic, more discursive and violent (such as the visit to the wealthy man, relation unknown). In her treks back and forth from the hospital, the camera gazes around the Congolese capital, cutting from views of the streets to Beya's visage, suggesting her impassive exterior and "proud" features as something sculpted from the environment itself. Eventually, the structured urgency gives way to something more unpredictable and oneiric, but also more meandering and diffuse. (Although even in the first hour, the blue-tinged shifts already suggest a break with the stark observational realism.) Dreamlike jaunts in a darkened forest are an embrace of "the Night," of the sorrow that permeates the second half, though as in something like Cocote, the formal and tonal range feels too scattershot, too unfocused for the final endpoint—a state of romantic and familial connection—to really accrue the necessary force. The various musical and expressionistic interludes start to feel rather desperate, less skillfully deployed than forced into the overall shape; and the emotional textures were rather unconvincing. Still, the conception is, indeed, quite marvelous: the first hour observing humiliating breakdown ("the price of pride"), with the second hour seeing it built up again—but this time, crucially, not through fierce antagonism (as is the default mode, initially), but through the very opposite: steady, tender (romantic) affirmation.