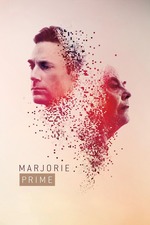 Improved on second viewing, in part because Tess' monologue on memories being "always in the process of dissolving" seemed less like a florid theatrical beat than a subtle bit of misdirection, so the extent to which Almereyda almost weaponizes the theatricality became clearer. It foregrounds the pervasive notion of Memory, whereas the notion of performance, even Art—the prime itself a kind of warped creation, not just the sum of stories, but an extension of a sensibility of the individual "training" it—seemed more fundamental, reality itself being a simulacrum of ever-shifting levels of artificiality predicated on individual engagement. (Question: How much unreality can or will one accept? How much—as the close-up of Tess set to "I Shall Be Released" suggests—does that ultimately matter?) Technology, again—as the series of photographs of Marjorie, followed by a streak of white in the sky suggest—is the mere conduit for a vision; here, it apprehends the memory from dissolving, and thus warps our sense of Time, but remains limited by the source, and thus subject to generational degradation. The film itself still feels somewhat limited in impact, though the ideas and emotions captured in the compressed chamber drama are very rich, the theatricality itself—so intelligently directed—adding to the thematic headiness. Brilliant, jarring temporal transitions; increasingly truncated sections (the "learning" process being very much in play for the audience); beautifully orchestrated Resnais-like interplay of performance, image, and texture in the montages, especially towards the end. Untested idea: double-bill with Lanthimos' Alps.

The Duchess of Langeais