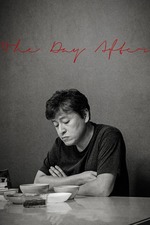 More eventually, but for now, it's probably enough to note that claims for this as one of Hong's best no longer seem ludicrous to me. Opens with what looks to be a dark night of the soul—the recurring music obviously adds to the effect—which primes one to expect a stripping down of its male protagonist, but eventually transforms into something else. Supplants structural doubling with some canny temporal scrambling, so the basic scenario is simple, but gains layers of psychological insight from the sequencing, the subject being: What motivates the fiction? "Why do you live?" (The film in a microcosm: the argument on why Areum is quitting.) In its conversations, feels more direct than Hong's previous work, which can be destabilizing, but which also removes some of the mystery of the conversations and often detracts from the flow of the film itself, since it gives the impression of blocks being put into place rather than organic manifestations (such as with Kim Minhee's Areum). Then again, there's something compelling about seeing Areum not as a "character" in the sense that Bongwan, his wife or his mistress are, but as a figure of grace placed in opposition to limiting notions of "reality" — literally, "beauty" (as her name translates) caught up in the games of men (not unlike Pauline in Rohmer's Pauline at the Beach). Not convinced that I'll ever consider this one of Hong's best—though the image of Kim in the car is surely one of his most beautiful—but the fact that I thrilled to the closing pan, which shifts from Areum to the delivery guy on his motorcycle, certainly demonstrates that it's done its work.