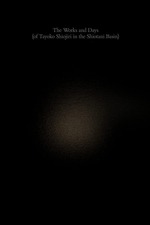 Reverse Shot review (excerpt below), which goes at some length and also gets into some more general critical questions that are hopefully of interest. Anyway, the film is well worth engaging with, especially if you have a (no doubt rare) chance to see it in a theatre.

In The Works and Days, one can identify the generic seeds of a diary film and community picture, marriage drama and portrait study. Occasional journal entries, ranging from drily observational to movingly laconic, punctuate Tayoko’s seasonal labors, which in turn open onto the larger workings of the village itself, seen in details like a couple of amusingly brief news broadcasts and an annual town hall meeting. Her relationship with Junji, meanwhile, takes precedence in the film’s third and fourth parts: the couple takes a train to the Tenryu-ji gardens, a rare excursion from their home village which culminates in a startling confessional monologue from Tayoko, balanced by equally startling silence from Junji and the directors’ uninflected presentation of the surrounding scenery. But even as The Works and Days develops this marital dynamic, which constitutes the most conventionally dramatic part of the film, relatively speaking, it continually unsettles any sense of a linear trajectory with a bevy of unexpected formal moves: passages that plunge the viewer into complete darkness and a densely layered soundscape of natural activity; an astonishing car-ride anecdote conveyed entirely in subtitles, with the diegetic audio replaced by the sounds of nesting swallows; and, perhaps most memorably, the subtlest ghostly effect since Uncle Boonmee’s wife returned for dinner.

One important consequence of this variety is that it makes narrative, so often seen as the primary basis of cinematic expression, a clear byproduct of more fundamental considerations of formal construction. Indeed, The Works and Days may be said to explore, in a particularly thorough manner, the notion that narrative in cinema is not in fact primary, but a secondary derivation of movement and time. This, in so many words, is a major tenet of Gilles Deleuze’s Cinema 1: The Movement Image and Cinema 2: The Time-Image, texts that, whatever their occasional obscurities, rise to the challenge of developing critical language adequate to cinema’s conditions of possibility. This explicit reversal of dependencies is one reason Deleuze is able to see Ozu, for instance, not as some paragon of “Japaneseness,” but as, quite simply, one of the great inventors of modern cinema. And it is this reversal, too, that enables The Works and Days to encompass such a breadth of stylistic variation.