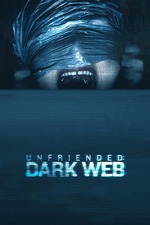 It could be that Stephen Susco is just some previously-undistinguished virtuoso, here aided by a team of tech wizards. More likely, it's that the text (i.e. the "dark web" of the Internet) is so generative—and the corresponding tools so under-explored in cinema—that the result is just riveting. The opening hacking is its own self-contained joke, not just sleek exposition, but also a rapid-fire time capsule of, e.g. "covfefe" and even the current notion of a password. And even without the first film's novelty, the initial set-up still compels: an incessant barrage of visual information; a faintly menacing build-up, eased in by a baseline of humour, often predicated on convenient, but plausible behavioural observations (e.g. the hilariously expository Google-search for "Charon"); and an improved interest in the actual character dynamics (though maybe it's just that twenty-somethings are less insufferable than teens—speaking as a twenty-something, of course). Topical, obviously, in the way it weaponizes the mutability of the image—it even offers a "real-time" Photoshop effort at one point—and the way that some (here, AJ, a loudmouth, paranoid conspiracy theorist) inevitably respond to everything by knee-jerk disbelief, the alternative being horrifying reality.

Not many films have exploited the suggestive, yet visceral awfulness of what is, incontrovertibly, out there in the digital void. (The brief snippets of video, here—or more specifically, the threat of them—are more squirm-inducing than most horror films can manage, and brought to mind this WIRED article about content-moderator jobs and the kind of soul-deadening toll such work entails.) And Susco does so with some canny effects: the glitchy screen that effectively simulates jump-scares without "cutting"; the side-by-side video streams (Serena, distraught, and Amaya, oblivious) that function like jarring shock-cuts; or even the complete cut-to-black, which, had it been held longer, could have been (or maybe is?) a small-scale digital update of Persona's burning celluloid. The horror-movie offings, while not entirely compelling, are still smartly conceived, quickly dispensed with, and (in the end) justified in their sadism—even though this sequel arguably relies less on Pavlovian visual cues (and more on acting) to express psychological motivation than the first (c.f. the varying use of "...is typing" cues). Cheats frequently with the sound levels and the Skype-call veracity, so the fullness of the conceit is traded in for superfluous aural suspense and more "classical" continuity, but those are ultimately minor quibbles. Interested to see the alternate ending,* as well as how much better (or worse) this plays on a laptop, but certainly worth seeing. Could very well be overrating this, but until the Harvard SEL feature version arrives, this will do.

* Fwiw, I got the "NO" ending—not really a spoiler until you've seen the film.

Sorry to Bother You