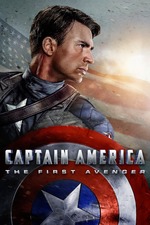 It is 1942, America has entered World War II, and sickly but determined Steve Rogers is frustrated at being rejected yet again for military service. Everything changes when Dr. Erksine recruits him for the secret Project Rebirth. Proving his extraordinary courage, wits and conscience, Rogers undergoes the experiment and his weak body is suddenly enhanced into the maximum human potential. When Dr. Erksine is then immediately assassinated by an agent of Nazi Germany’s head of its secret HYDRA research department, Johann Schmidt aka the Red Skull, Rogers is left as a unique man who is initially misused as a propaganda mascot. However, when his comrades need him, Rogers goes on a successful adventure that truly makes him Captain America and his war against Schmidt begins.

Now, when it came to Captain America I has as much knowledge about it as I did with Thor – virtually zero. In some respects I think this is a blessing in disguise because then I’m not caught up on whether certain bits are faithful or not the comic itself. Captain America: The First Avenger is the last major comic film of the year to which will lead onto next year’s ‘The Avengers’. Ironically being the last film it is in fact the first superhero in this Marvel universe that starts the avengers initiative. The film is set during World War II which also makes it unique, a period superhero war film. Kind of like this years X-Men: First Class but less ‘traditional’ war orientated.

Chris Evans is the man to don on the Shield and plays Steve Rodgers/Captain America. This isn’t his first foray into the hero world having previously played Johnny Storm/Human Torch in Fantastic Four which is also a Marvel creation. The less said about the Fantastic Four series the better to be honest! Have to say though Chris Evans is excellent as the ‘all American war hero’ and is convincing in both his pip-squeak Steve Rodgers character and the beefcake hero of Captain America. I find myself liking Chris Evans more now after seeing some more diverse roles.

Hugo Weaving is the villain of the film, he plays Johann Schmidt/Red Skull, a power hungry officer and right hand man of Adolf Hitler’s advanced weaponry division – but so power hungry that he disbands from Hitler and wants to conquer the world himself with his own army. Hugo Weaving does a great a baddie, even with I’d say slightly dodgy German accent but nothing too noticeable. I don’t he has been the best villain out of this years comic films however though but Weaving is still a joy to watch on screen.

Hayley Atwell is the dame of the film, sorry I mean love interest. She plays Peggy Carter who is an officer with the Strategic Scientific Reserve. She’s charming but looking back doesn’t actually do an awful lot because it wasn’t just her helping Captain America out, I felt she kinda got lost in the background despite being to connected. Tommy Lee Jones as Col. Chester Philips is what you’d expect from a World War officer and credit to Tommy Lee Jones he gets the job done with a simple yet effective performance.

With the main cast on display Captain America also boast an impressive supporting cast, Stanley Tucci plays Dr. Abraham Erskine who originally created the super soldier, I really like Tucci and I couldn’t say a bad word about his role within this. The young Howard Stark is played by Dominic Cooper who impressed me as the young American inventor. Neal McDonough (who seems to be back in familiar war surroundings from his time on Band of Brothers) and Toby Jones complete the rest of the main supporting roles. Also you’ll have Samuel L. Jackson as Nick Fury towards the end and also the ‘spot the Stan Lee cameo in this Marvel film’ game.

I really enjoyed Captain America: The First Avenger as it was exactly how I hoped it would be, a superhero film that doesn’t take itself too seriously but just enough to keep the balance. It reminded me of how fun Iron Man was and also Thor which is why I liked it so much. The 3D is of course not with writing about at all so I’d recommend seeing it in 2D to get the full colour in. I didn’t pick up on too many negatives except for certain un-plausible setups like when Steve Rodgers first turns in Captain America which leads into a kind of chase sequence (I won’t say any more) and also when he goes charging into an army base where I felt who could of be EASILY detected. The films ‘gun-ho pro-American star spangled banner’ theme didn’t bother me one bit as that was expected with a film called Captain America which was designed just for that purpose!

I’d highly recommend seeing this film, especially if you’ve seen all the other comic films this year so why not? Thor however still seems to be my favourite this year. Also another point to see it is for The Avengers slightly longer than a teaser, trailer after the final credits so stick around for that – it really gets you excited.