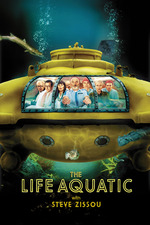 Not what I was expecting, at all. Quite possibly my favourite Wes ensemble cast and favourite use of soundtrack in one of his films. Not to mention some of the best action scenes ever, please put Bill Murray in the next John Wick movie.

This is his longest film but it doesn’t feel it. The bunch of characters are so interesting and all played really well. I can’t not mention Noah Baumbach’s little cameo too, that made me smile.

I also loved the costumes, kinda want to dress up like a Zissou team member for Halloween now.

Only have Bottle Rocket left from Wes’ feature films!