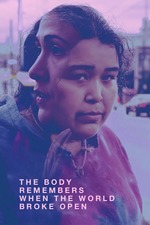 The Body Remembers When the World Broke Open 2019

Very interesting film about a subject I'm passionate about. I happen to be spending time in the neighborhood this was shot in right now. Filmmakers Kathleen Hepburn and Elle-Máijá Tailfeathers were kind enough to share a link with me before it hits TIFF and hopefully theaters later this year.

I found the depictions pretty accurate and the film is definitely coming from a good place -- interested in exploring the cycle of abuse and trauma. A miasma of despair most definitely looms over the world of the film.

Almost the entire film is a one take (and supposedly has hidden cuts yet they are impossible to spot). Cinematographer Norm Li (Beyond the Black Rainbow) does a fantastic job with non-jarring hand-held and from what I can tell, mostly natural lighting. Shot on Super 16mm.