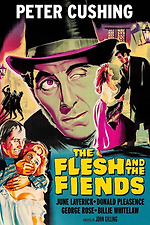 The Flesh and the Fiends

Had heard about this title but never would have sought it out. Thankfully Kino Lorber just released a special edition Blu-ray. An adaptation of the story of William Burke and William Hare who, around 1827 in Edinburgh, Scotland, provided more than a dozen corpses to the anatomist Dr. Knox.
(from IMDB trivia - Burke was hanged and his corpse was dissected and his skeleton displayed at the Anatomical Museum of Edinburgh Medical School where, as at 2020, it remains.)

The continental version has a few extra minutes which includes topless nudity, shot for the rest of Europe but a real no-no in the UK at the time.

Shot is Dyaliscope as Dylascope (French anamorphic) by Monty Berman.

Watched the Kino Lorber Blu-ray and listened to the commentary. Good stuff.

Grace of My Heart