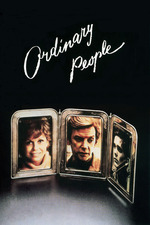 Ordinary People came out in a non-snowy month in 1980. I know this because I walked home after the movie, even though I lived quite a hike away and it was an easy walk (I didn't have to walk carefully as I would on snow or ice).

It was nothing like the previous films I had seen. My previous favourite film was Grease, probably because it was the first film I'd seen on my own with friends; it wasn't a Bruce Lee movie that dad took me to as an excuse to eat popcorn. Ordinary People came out in the age of Star Wars and Saturday Night Fever and Grease. My best friend Nicole and I went to see it, maybe because of Timothy Hutton, maybe because of Mary Tyler Moore, maybe because nothing good was playing at the Palace, the only other theatre in town.

We had never seen anything like it. We were not expecting anything that intense and intimate. It was so powerful, we were so affected by it that when we left the theatre we did not, would not, could not speak. We didn't even stop to figure out if we were going to take the bus home. Neither of us wanted to be interrupted, so we just started walking, direction home, in silence.

I haven't seen the film since.

Mary Tyler Moore died a few days ago and I considered watching it, watching her with her broken heart. Her only son had died just prior to or during shooting and first time director Robert Redford had used that to get the performance from her. I never forgot that tidbit, and I never knew what to do with it.

I considered re-watching the film, but I'm afraid. I have a history of film now. I know words like 'melodrama' and 'manipulative'. I didn't back then. Worse case scenario is I rewatch and can't see through the melodrama and I come out the other end gagging. Best case, of course, is that it is just as good as I remember, or to the very least, nostalgia for it takes over when necessary.

I guess I have to ask myself how cosy I want to be with the memory of seeing it at the Victory with Nicole back in 1980...

[edit on Feb 8 2017]
I sent my friend Nicole my review because I mention her. Here is what she said (see translation below):

"Before reading your review I want to tell you about the memory I have of having seen the film with you. It was my first English film at the cinema, alone with a friend. I remember after the film, how we both loved it, how we had promised each other to always be honest and true. Do you remember that? It is one of my best cinema experiences.

We might be better off with our memory of having seen the film. It is all about what happened after the film as well. It was the beginning of our friendship. I slept over at your place that night. We talked all night. We smoked cigarettes... that is all part of the film.

And now I will go see how you remembered it..."